In the land of Saint Vincent and Prince Henry the Navigator, clerics, nobles, kings and soldiers have forever monumentalized the landscapes of Vila do Bispo, bequeathing us elegant religious buildings such as the medieval hermitage of Guadalupe, near Raposeira village, and the baroque church of Vila do Bispo, but also a large number of forts among which stands out the Sagres Fortress, and even one of the oldest and most powerful lighthouses in the world, located in Cape Saint Vincent.

We can go back to the 4th century BC to retrieve the first historiographical references to the region of Sagres. Several classical authors, Greeks and Romans, described Sagres, according to the Mediterranean view of the world at that time, as the end of the known world, the extreme southwest corner of Europe. In the 1th century BC, Strabo, a Greek historian, geographer and philosopher, ‘baptised’ Sagres as “Hieron akrotérion”, a Greek name translated into Latin as “Promontorium Sacrum”, meaning Sacred Cape… Sagres! Greeks, Romans, Muslims, so many civilizations, so many people, but it was thanks to the personal motivation of Prince Henry the Navigator (1394-1460) that, from 1443 onwards, an effective settlement emerged within the walls of the fortress he had built. Prince Henry the Navigator stayed here on several occasions, giving importance to the pioneering sea expeditions that he organized, both to the Atlantic islands and to the coast of Africa. He died here on November 13, 1460. At the end of the 19th century, the first houses emerged in the area that today corresponds to the historic centre of Sagres.

This imposing promontory marks the extreme southwest corner of the European continent, the westernmost Mediterranean. In Antiquity it was considered a natural sanctuary and home of Greek divinities. In the Middle Ages, between the 8th and 12th centuries, devotion to this place continued when the remains of the martyr Vincent were brought here, one of the first saints of the Roman Catholic Church. According to religious tradition, somewhere in this place there was a temple, which has since disappeared, dedicated to the cult of Saint Vincent, the Arabic “Kanisat al-Gurab” or the Chapel of the Raven, at the time one of the most popular sanctuaries on the Mozarabic pilgrimage routes of the Iberian Peninsula. Later, in 1173, the first King of Portugal, D. Afonso Henriques, sponsored another transfer of the relics of Saint Vincent to Lisbon. Since then, this promontory has been called Cabo de São Vicente. In 1516, a Franciscan convent was founded here, which existed until 1834. In 1846, over the ruins of the convent, the Dom Fernando lighthouse was built, one of the most important lighthouses on the Portuguese and European coasts. Its light beam can be seen 32 nautical miles away, making it one of the 10 most powerful lighthouses in the world. 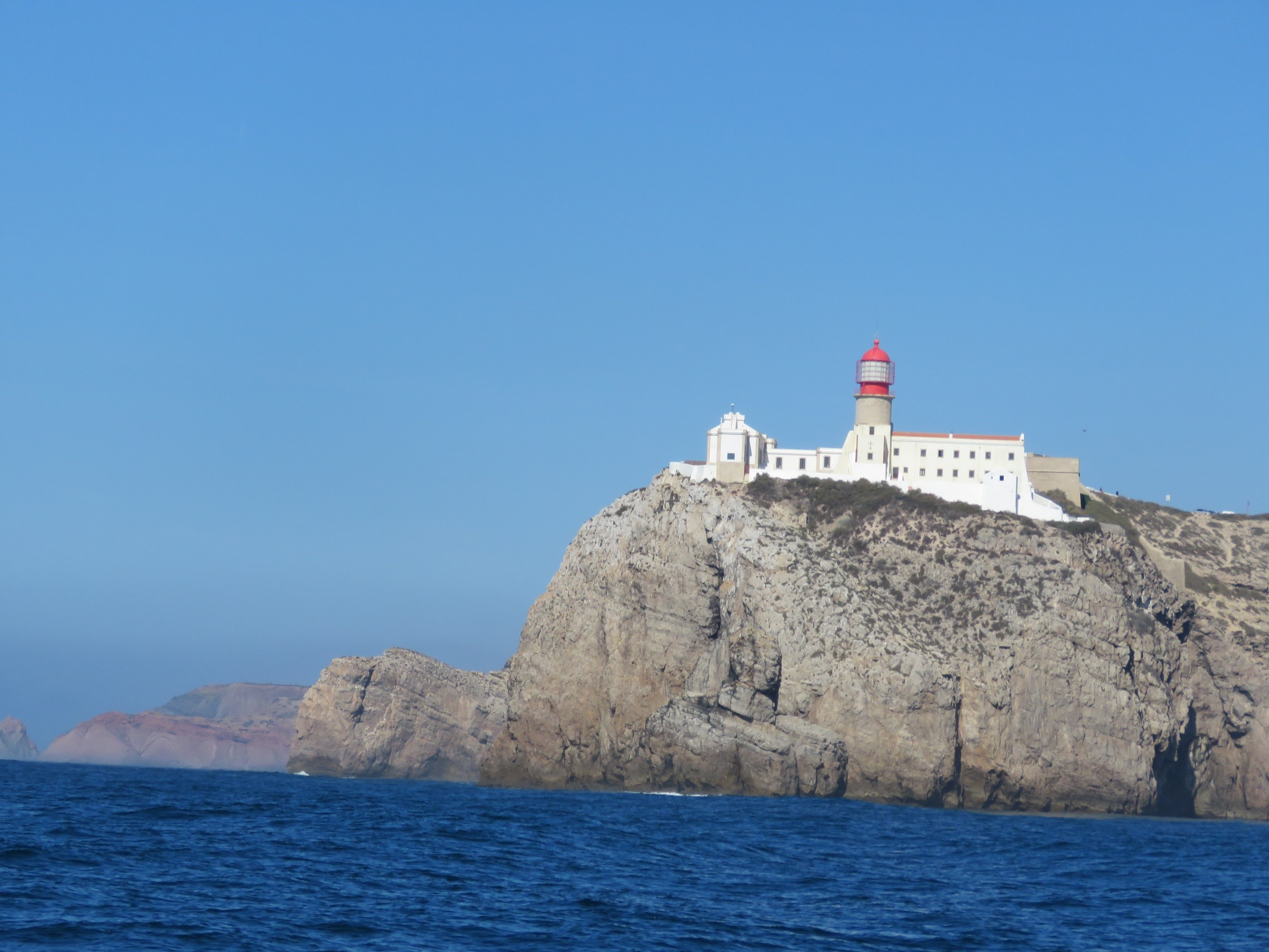 It was thanks to the personal interest of Prince Henry the Navigator (1394-1460) that this fortress was built in 1443. Its main purpose was to support navigation and the vessels that needed refuge from rough weather, or those that needed to take on board fresh water and had to anchor in Mareta cove. Prince Henry the Navigator stopped here several times to give support to his overseas navigation projects, both for the Atlantic islands and for the coast of Africa. He here died on November 13, 1460. In the 16th, 17th and 18th centuries the fortress underwent several renovations, mainly following the damage caused by the attack of the English privateer Sir Francis Drake in 1587, and by the Great Earthquake of November 1, 1755. In 1793 it gained its current configuration. Over the centuries soldiers and their families lived within its walls. Besides the Church of Nossa Senhora da Graça, inside the square there is a mysterious circular design with 32 spokes, drawn in the ground in rough stone, known as the “rose-of-the-winds”. Some think it is a kind of compass, others a giant sundial. In 1960, important celebrations took place here in honour of Prince Henry the Navigator, 500 years after his death. 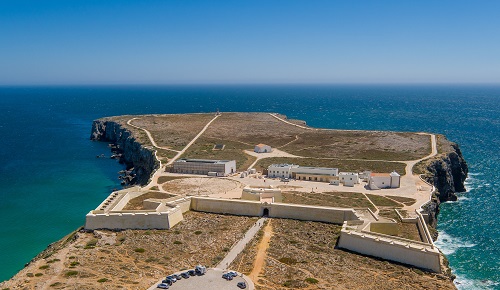 Built in the 16th century dedicated to Santo António, this fortification was intended to protect the tuna fishermen whose fleet was in the neighbouring cove. It was destroyed in 1587 by the forces of the famous English privateer Sir Francis Drake. The entrance, over the defensive door, bears a shield with the Royal Arms and an inscription dated 1632, the year it was rebuilt. It was active until the end of the Civil War, in 1834. From then on it fell into decay. In the 1960s, it was transformed into a hotel unit to support the Pousada de Sagres. Currently, under the management of Vila do Bispo City Council, the Fort of Santo António do Beliche hosts the Birdwatching & Nature Activities Festival, which is held annually on the first weekend of October. Inside, stands the Chapel of Santa Catarina, already existing in the 16th century. 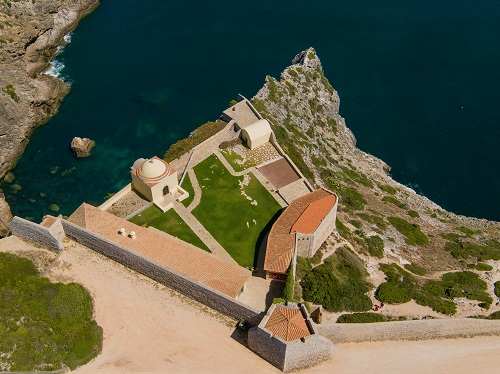 Dedicated to Nossa Senhora da Conceição, this church was built between the end of the 15th century and the beginning of the 16th century. During the first quarter of the 18th century, it received important restoration works. It was at this time that it incorporated the characteristic Baroque decoration, with imposing gilded carved altarpieces, magnificent blue and white tile panels made in Lisbon, and a ceiling with wooden frames decorated with Christian symbology. In the centre, we can see the Portuguese Coat of Arms. It has a single nave and a vaulted high altar dedicated to Nossa Senhora da Conceição, formerly dedicated to Santa Maria do Cabo. There are also two panels from the end of the 16th century representing the Apostles, Peter and Paul. To one side, the Chapel of Nossa Senhora do Carmo is of particular interest with elements adorned with gilded carvings of superb quality. In a room annexed to the high altar, there is an important collection of sacred art, in particular a 16th century reliquary of Saint Vincent. In the sacristy there is a 17th century vestment chest. 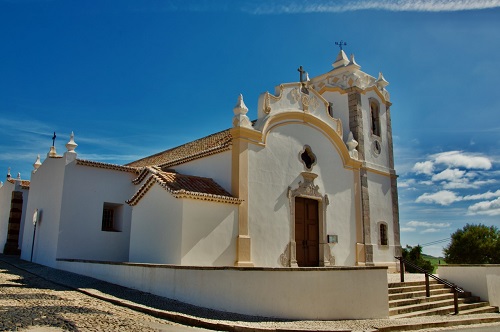